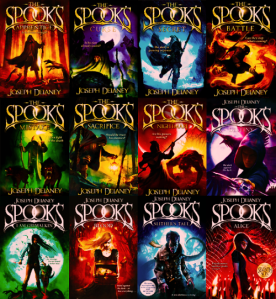 The Spook’s Apprentice by Joseph Delaney

Age: 9-11  (scary in places, especially when the main character is being trained in a haunted house)

Plot Summary: This first story, in a series of over 12 novels, is set in the North of England. The time has come for a young boy, the seventh son of a seventh son, to leave his home and family behind him as he embarks on a terrifying new adventure; he is to become the latest in a long line of apprentice to the county’s mysterious Spook. The Spook lives on the fringes of society, hated by some but needed by all when the things that go bump in the night stray into the world of man.

Why this book? In the first instance this is simply an excellent series of books for older children. The stories are well written, full of suspense and they also achieve an excellent balance of character driven story-telling, alongside powerful narrative plot lining. My own use of these books in the past have actually converted some year 6 boys to reading. The benefit of introducing the children to a series in class is that once you have them hooked, the reading may continue beyond the classroom. The Spook’s Apprentice actually brought a parent of one of my pupils to tears; the reason – it was the first time EVER that her son had put books on his Christmas list!

Fantasy, myths and legends – the books are steeped in mythology. They pick up on the features of traditional story telling about witches, bog arts and ghosts but add their own twist of the newly created Spook’s role as a nightwatchman for humankind. In addition, the story also draws upon real world legends and mythology from the UK in the form of the Pendle Witches. If you are lucky enough to live in this part of the world then I am sure you have already seen the potential for an inspiring trip to the Pendle Witch attractions!

PSHE – the main character of the young apprentice is a revelation. He is not the all powerful hero of many books. At the start of the story he is an incredibly vulnerable child who misses his mam greatly, has a difficult relationship with his Dad due to his sensitive nature and weak frame and (most troubling in terms of the story) is scared of the dark. The story overall is about coming of age and learning to stand on your own, facing challenges, away from the protection of your parents. The developing friendship between the Spook and his apprentice is also excellent as we see it evolve from cruel disregard to true friendship. In addition, there is also the innocent development of a relationship between the apprentice and a suspected witch…is she who she seems to be? Why might she be conflicted?

Instructional/Explanation writing – the apprentice is always learning and the book is full of the Spook’s teachings. This could provide some excellent writing stimulus; explaining how to trap a boggart, for example, or instructions of Spook’s potions and powders.

Geography/mapping – the book continues a beautifully illustrated and plot linked map of the story world. It could be lovely to jump into this map and conducted some position and movement activities linked to events, journeys and challenges of the main story…of event create some new tales!

Art –  the descriptions in the text of settings and characters are dripping with atmosphere. It would be great for the children to create their own artwork (across a range of media) to realize their interpretations of the places and people being described. Watercolor painting of the moonlight moors, clay sculptures of the terrifying creatures or pen/ink drawing to emulate the style of the book illustrations would all provide rich activities.

DT – An amazing collaborative DT textiles project could be to create a Spook’s cloak, adorned with the protective symbols of his trade or with lining that tells the story of his exploits using different appliqué and sewing techniques. The children could also fashion their own Spook’s staff, created a 3D relief map based on the map in the book or even build a structure to emulate the Spook’s secretive hideout!

Film/Media link – the original series of books was snapped up by Hollywood – much excitement was felt by fans of the books, however, Hollywood disregarded much of the book when turning it into the film ‘Seventh Son’. It is unfortunately a confused mix of Yorkshire-Irish-Texan accented characters, overblown and exaggerated versions of the original plot points and 100 too many special effect sword fights. However, it does provide excellent fodder for comparing text and film versions of the same text, for good and bad!

In addition, the author Jospeh Delaney and the publishers, have produced a brilliantly atmospheric website in the form of http://www.spooksbooks.com where they extend the mythology and provide additional activities to engage readers of all ages!

If you are a fan of the books or have other ideas to contribute on their use with children, add a comment!